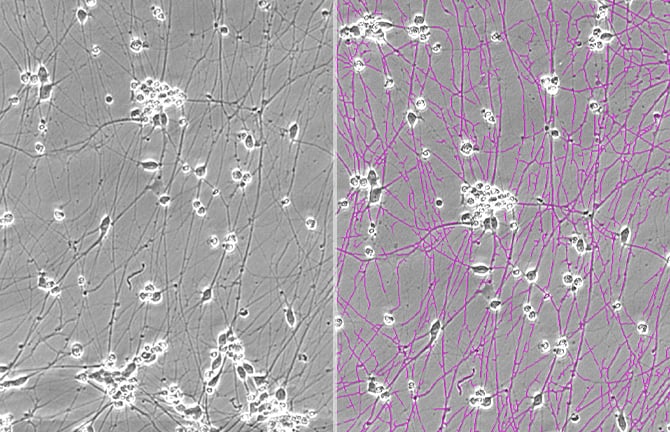 The neurite length of induced pluripotent stem cell (iPSC)-derived neurons is a useful index for evaluating the efficacy of various drugs. Phase contrast imaging allows for non-invasive and real-time observation of neurites over an extended period of time.

Until now, it has been difficult to procure a sufficient amount of human neurons for screening because of limited availability and the inability to expand somatic neural stem cells.
However, in recent years, the technology for expanding and culturing human pluripotent stem cells (hPSCs), such as human induced pluripotent stem cells (hiPSCs) and human embryonic stem cells (hESCs), into neural cells has advanced.
This has enabled us to evaluate the efficacy and toxicity of drug candidates using hPSC-derived and expanded neural cells. Attempts have also been made to use patient-derived hiPSCs to create neurons that are characteristic of the disease, which promises more efficient drug screening.
Neurite length measurement is widely used to evaluate the effects or toxicity of candidate compounds for neurological diseases. Phase contrast analysis allows for neurite length (and other morphological features) to be non-invasively recorded and measured without staining and over an extended period of time.

Issue-1
It is difficult to manually measure neurite length

Neurite shape is complicated and changes constantly, making it difficult to quantify length

Issue-2
Generally, fluorescent stains can only be used for endpoint assays

Methods for labeling cell components with fluorescent dyes, such as immunostaining, often require the cells to be fixed, precluding the continuous observation of living cells.

There is a possibility that fluorescent protein expression and vital staining can alter cell characteristics. Therefore, it is preferable to eliminate this possibility of altered cells.

Non-invasive phase contrast imaging and analysis allows neurites to be automatically recognized and total neurite length to be measured.Phase contrast images of neurons can be analyzed to identify neurites, measure their lengths, and provide an image with mask overlay. Time-lapse image acquisition allows for quantification of changes in total neurite length over time. Using the BioStudio-T, a cell observation system which may be installed inside an incubator, phase contrast imaging of cells can be performed over an extended period without exposing sensitive hPSCs to changes in the culture environment.Cell image analysis software Cell Analysis ModuleCell observation device BioStudio-T

Changes in neurite length over time
hiPSC-derived GABAergic neurons seeded at a density of 0.5 × 105 (green), 1.0 × 105 (blue), and 1.5 × 105 (purple) cells/well were cultured for 6 days. Time course of total neurite length per 1 mm2 of field (left) and neurite length per single neuronal cell/cluster (right) were automatically obtained.

As an evaluation matrix for assay construction 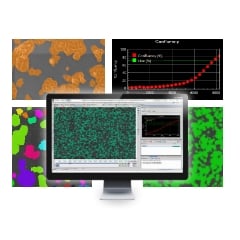 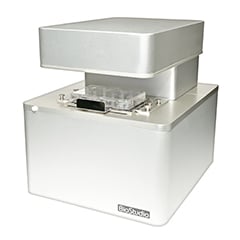